The Masters in Law (MLaw) is an accelerated two-year, full-time postgraduate degree in law. It is designed for graduates in a discipline other than Law who wish to obtain a Law degree for professional practice for England & Wales and Northern Ireland or in aid of other career goals.

The MLaw is offered on a modular basis. To complete the degree a total of 300 CATS points must be obtained. Twelve modules (20 CATS each) must be taken and a dissertation (60 CATS) must be completed. The structure is as follows:

Normally a 2.1 Honours degree (63% or above) or equivalent qualification acceptable to the University in a discipline other than Law.

Exemption from these requirements may be considered for those applicants who:

The information you submit to Queen’s University Belfast will only be used by them or their data partners to deal with your enquiry, according to their privacy notice. For more information on how we use and store your data, please read our privacy statement.

The information you submit to Queen’s University Belfast will only be used by them or their data partners to deal with your enquiry, according to their privacy notice. For more information on how we use and store your data, please read our privacy statement.

At Queen's we offer postgraduate courses that come with a promise of value: to produce world-class graduates and provide the tools for you to take a leading role in the world economy. Visit our Course Finder to view the range of courses available along with useful information on entry requirements.

Where is Queen’s University Belfast 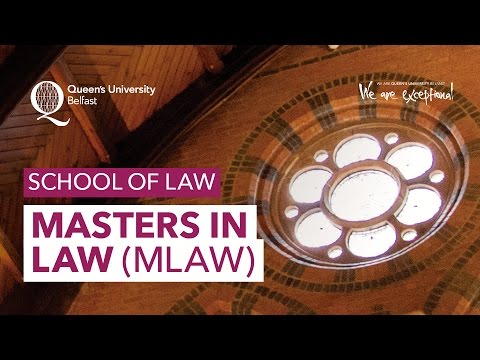 The School of Law congratulates Kate Blomfield, a graduate from our LLM programmes in 2009.

Kate joined Ratcliff & Associates Law Firm in 2003 after completing her LL.B at the University of Victoria and clerking with the Nunavut Court of Justice. Prior to and during Law School she worked on Aboriginal rights issues in Canada and Australia. As an associate at Ratcliff, Kate has appeared in BC Provincial Court, BC Supreme Court and in the Federal Court of Canada and has assisted with matters before the BC Court of Appeal.

Kate returned to Canada after her graduation in Belfast to learn that her firm had successfully defended the rights of the Nuu-chah-nulth peoples to commercially harvest and sell fish catch within their ancient territorial waters.

On November 3rd 2009, the Supreme Court of British Columbia ruled that the Nuu-chah-nulth peoples (located on the west coast of Vancouver Island) have the right to commercially harvest and sell all species of fish within their traditional territorial waters. “Today, this decision confirms what we’ve known all along,” said Cliff Atleo Sr., president of the Nuu-chah-nulth Tribal Council. “We have been stewards of our ocean resources for hundreds of generations. And the government of Canada was wrong to push us aside in their attempts to prohibit our access to the sea resources our people depend upon.”

Aboriginal groups are celebrating the major legal victory in Ahousaht Indian Band and Nation v. Canada (Attorney-General). The case was filed in 2003 after years of treaty negotiations with the federal government and the province broke down under the British Columbia Treaty Commission (BCTC) process. The victory comes after more than a decade of legal preparations and 123 days in court. Madame Justice Nicole Garson wrote in her judgment: “At contact, the Nuu-chah-nulth were overwhelmingly a fishing people. They depended almost entirely on their harvest of the resources of the ocean and rivers to sustain themselves.” She pointed out that the Nuu-chah-nulth people were able to prove a long history of trading and selling fisheries resources since first contact with European explorers (Spanish explorer Juan Perez reached Nootka Sound in 1774).

Check out our other Masters Courses in Belfast, United Kingdom